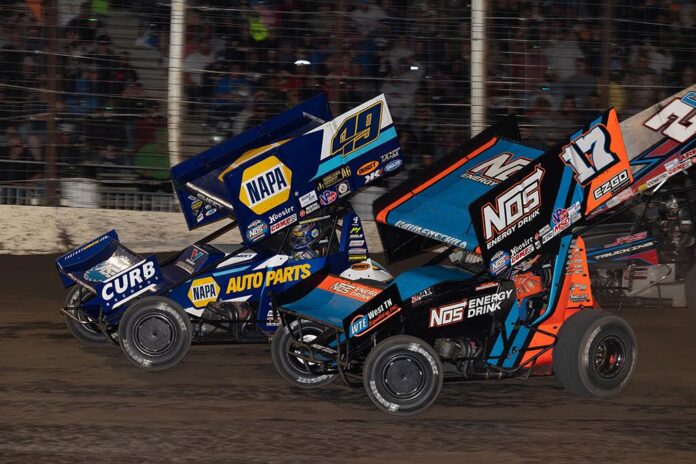 GRAND FORKS, ND – It seems as if River Cities Speedway has been providing “race of the year” vibes for the World of Outlaws NOS Energy Drink Sprint Car Series all the way back to the dawn of time.

On Wednesday night, the “world-famous legendary bullring” offered up its latest masterpiece, a last-lap pass for the win between the Series’ forefront champion and the Series’ hottest rising star.

It’s something the Grand Forks, ND oval has become famous for with daring moves in tight traffic, treacherous curbs atop a multi-lane surface, and nail-biting finishes that stun the fans over and over again.

This mid-week rescheduled date was no different.

Carson Macedo commanded the opening 28 laps aboard the Jason Johnson Racing #41, but Sheldon Haudenschild rose to the top spot on Lap 29 and seemed to be a sure bet to seal the deal on win #8 this year. However, with each passing lap, the lead dwindled and dwindled for the NOS Energy Drink, Stenhouse Jr. Marshall Racing #17.


It was The Big Cat Brad Sweet who pounced perfectly, though, watching as the white flag waved and immediately flipping his Kasey Kahne Racing, NAPA Auto Parts #49 into attack mode. The savvy veteran rolled the middle of turns one and two right by the young gun and took command down the backstretch.

The duo ran wheel-to-wheel through turns three and four before a drag race to the checkered flag solved all with a mere 0.133-second advantage, in the favor of Sweet.

“I hope you fans enjoyed that finish,” Sweet told the Grand Forks faithful as they stood in awe for the second-straight year. “We’ve been struggling lately, so I’m just happy to get the win. I’ve been close here so many times, but Donny just dominated this place for years. We finally found something that got us on the top step of the podium; it feels good.”

Ironically enough, Sweet’s last-lap pass of one Haudenschild lifted him past another Haudenschild in the grand scheme of the history books.

By overtaking Sheldon for his 73rd career win, the Grass Valley, CA native officially moved beyond Jac to take sole possession of 11th on the World of Outlaws All-Time Wins List.

After starting fifth in the 40-lap Feature, Sweet slipped as far back as eighth, but never let himself get too far out of it. He went seventh-to-four on a single restart on Lap 15, then passed Schatz for third on Lap 33, snuck by Macedo for second on Lap 35, and snookered Haudenschild for the win on Lap 39.

“I knew when I saw the white flag that I had to go for it,” Sweet noted. “The lappers kept moving Sheldon around just enough to give me that chance. I found the middle through turns one and two, and that’s how I got by Donny and Carso, too. It got tight there at the end, glad we could hang on for it.”

In a heartbreaking turn of events, Sheldon Haudenschild was handed his sixth second-place effort of the season in dramatic fashion. The throttle smasher and cushion blaster from Wooster, OH didn’t hang his head through the disappointing result but instead looked forward to the momentum his NOS Energy Drink squad is building.

“All we can do is keep learning and getting better,” Haudenschild acknowledged. “I survived the first half just playing it cool, but I probably should have protected the middle more there at the end. Brad is one of the best in the business, those guys were great tonight. This track was incredible, for sure. We’ve got a really good car right now, so I’m looking forward to his next stretch.”

Outside polesitter Carson Macedo paced the opening 28 laps of the 40-lapper before settling into a third-place finish. It was a much-needed podium appearance for the Jason Johnson racing #41 following a rough-go at Huset’s on Sunday. The Lemoore, CA 25-year-old knows he just can’t make mistakes competing against The Greatest Show on Dirt.

“I made too many mistakes in traffic and that’s what really cost me,” Macedo mentioned. “All it takes is one mistake to lose these Outlaw races with how good everyone else is. I tried to move around and find something after Sheldon got me, but he set such a good pace up top there was no keeping up. It sucks to lead that many laps and not win the race, but it’s good momentum to get this #41 team going again.”

Rounding out the top-five on Wednesday Fargo’s own Donny Schatz with his 12th-straight top-10 run in the Tony Stewart/Curb-Agajanian Racing #15, and behind him was Shark Racing’s Logan Schuchart in the fifth position aboard the Drydene Performance Products #1S.

Closing out the top-10 at River Cities was David Gravel & the Big Game Motorsports #2 in sixth, James McFadden & the Kasey Kahne Racing #9 in seventh, Brock Zearfoss & the Moose’s LZ Bar & Grill #3Z in eighth, Mark Dobmeier & the Buffalo Wild Wings #13 with a season-best ninth, and Wayne Johnson & the Two-C Racing #2C with a second-straight top-10 effort.

UP NEXT: A seven-hour drive from Grand Forks, ND to Greenwood, NE will lead the World of Outlaws NOS Energy Drink Sprint Car Series to I-80 Speedway for Friday’s FVP Platinum Battery Showdown. On Sunday, the week concludes with a trip to South Dakota’s Black Hills Speedway. 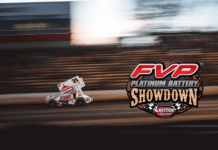