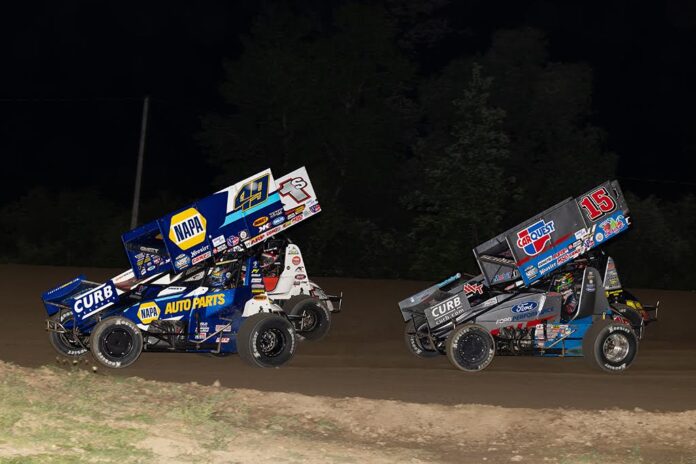 ALGER, WA – The wait is finally over. The Greatest Show on Dirt is returning to the west coast.

After a two-year absence, the World of Outlaws NOS Energy Drink Sprint Car Series is back in Washington state with four straight nights of racing scheduled from Friday to Monday.

Highlighting the Pacific Northwest adventure is the Sage Fruit Skagit Nationals, a three-night affair at Alger’s Skagit Speedway capped off by a $25,000-to-win finale on Sunday, September 5. Following that, a Monday night edition of DIRTVision rolls on with a trip to Grays Harbor Raceway on September 6.


POWER UP: Donny Schatz and the Tony Stewart/Curb-Agajanian Racing #15 team have hit a new level since they switched to a newer edition of the Ford Performance Stewart 410 engine earlier this month. Their current streak of 14 consecutive top-10 finishes is highlighted by an extraordinary stretch of six straight top-four results over the last three weeks, including two wins at Red River Valley (ND) Speedway and I-80 (NE) Speedway.

With Washington in play this weekend, Schatz has all the potential to keep his hot streak rolling and even take it to the next level. He’s the only full-time driver with wins at both tracks this weekend, topping Skagit on four occasions and winning five Features at Grays Harbor. Sitting -102 points of Gravel in second, Schatz has plenty of time to make more ground in the championship chase.

HOMECOMING: For the first time since 1998, Kasey Kahne will compete in his home state of Washington this weekend with the World of Outlaws Sprint Car Series. Since that August night at Grays Harbor 23 years ago, Kahne has become a NASCAR Cup Series superstar with 18 wins and built a perennial contender in The Greatest Show on Dirt with Kasey Kahne Racing. This time, he’s heading back home as a “full-time” driver since taking the reigns of the Roth Motorsports, Beef Packers #83.

A frequent competitor at Skagit and Grays Harbor while growing up, this weekend’s four-race stretch in Washington is the perfect opportunity for the Enumclaw, WA native to snag his first-career World of Outlaws win. The Sage Fruit Skagit Nationals on Friday through Sunday is located just over two hours away from his childhood home, while Monday’s stop at Grays Harbor is only 80 miles away with Kahne fans expected to pour into the gates at both venues.

SECOND-HALF SURGE: Brock Zearfoss’ momentum from making the Knoxville Nationals A-Main has without a doubt carried over to the rest of his World of Outlaws tour. His five races post-Knoxville have resulted in an average finish of 8.4 and he’s racked up four consecutive top-10 finishes, the longest stretch of his career against The Greatest Show on Dirt.

Next on the agenda for the Jonestown, PA native is a top-five finish, something he’s had within his grasp on countless occasions, but has yet to achieve in 2021. He’ll take the #3Z to Washington this weekend in preparation for his first-ever west coast swing with five new tracks on deck.

MONDAY NIGHT DIRTVision: Next Monday’s stop at Grays Harbor (WA) Raceway will mark the 15th and (as of now) final weeknight race of the 2021 campaign. From there on out, it’s back to being weekend warriors as the remaining 15 races are run on Fridays and Saturdays through the season-ending NGK/NTK World Finals on November 4-6 at The Dirt Track at Charlotte.

Brad Sweet has undeniably been the king of weeknight shows this year, scoring five of his 15 victories on weekdays. David Gravel is the only other driver with multiple weekday wins, claiming two to his credit.

HAUD’S HOT: Sheldon Haudenschild averaged a 1.6 finish last week in three Features through North Dakota, Nebraska, and South Dakota. The newly-turned 28-year-old never finished outside the top-10 during August and collected three of his career-high eight victories this season during the eight-race stretch.

With $25,000 on the line at the Sage Fruit Skagit Nationals this weekend, the Wooster, OH native looks to cash in on his recent momentum with the richest win of his World of Outlaws career. The Stenhouse Jr. Marshall Racing, NOS Energy Drink #17 is no stranger to victory lane at the Washington oval, as Sheldon scored a win at the track in 2018.

THE WAIT IS OVER: When The Greatest Show on Dirt finally roars back to life in the Pacific Northwest on Friday night, it will have been exactly two years and one day since the last World of Outlaws race in Washington on September 2, 2019. The COVID-19 pandemic locked the Series out of the state last year and more protocols shut down a west coast swing this spring, but there’s no stopping the NOS Energy Drink Sprint Cars this fall.

For Skagit, a three-day show will bring about the track’s 39th, 40th & 41st World of Outlaws races. At Grays Harbor on Monday, the Elma, WA facility hosts the Series for the 30th time.

BACK ON TRACK: It’s been a whirlwind summer for Logan Schuchart and the Shark Racing boys. They won $50,000 in June’s Jackson Nationals, but a dismal July followed with six finishes outside the top-10 and only one podium appearance to show in 13 races. The Drydene Performance Products #1S turned it around in August, though, recording six top-fives in eight events, including a fifth-place finish at the Knoxville Nationals.

The Hanover, PA native enters the month of September with a perfect opportunity to return to form at the Sage Fruit Skagit Nationals. In 2019, when the World of Outlaws last raced at the Alger, WA 3/10-mile, Schuchart led all 70 laps and swept the weekend. He’ll try to recreate that magic with $25,000 on the line in Sunday’s finale to the three-day special.

POINTS CHASE: With 19 points-paying Features left, the championship chase remains on middle ground as it’s not locked up by any means, but it’s not wildly close either. Entering the Washington weekend, Brad Sweet and the Kasey Kahne Racing #49 lead David Gravel (-120) and the Big Game Motorsports #2 and Carson Macedo (-160) and the Jason Johnson Racing #41.

All three drivers will have four chances this weekend to either extend or cut away at the points lead. With hopes for a third-straight World of Outlaws championship, Sweet just needs to keep up business as usual with his 4.98 average finish. For Gravel, he needs to out-earn Sweet by an average of 6.32 points per night, while Macedo needs to make up a greater task of 8.42 points per night.

Around the Turn: Following a four-night stay in Washington, the World of Outlaws NOS Energy Drink Sprint Car Series continues its west coast swing with back-to-back weekends in California. First on the Golden State agenda for The Greatest Show on Dirt is the Gold Cup Race of Champions at Silver Dollar Speedway on September 10-11.