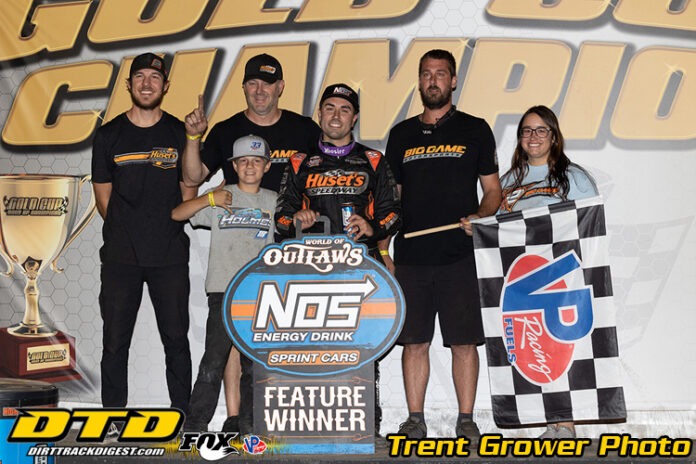 CHICO, CA – The Greatest Show on Dirt didn’t disappoint in quickly making up for the two-year absence from California.

It was a long-awaited return (728 days) for the Chico faithful, but it was an even longer awaited victory for David Gravel.

Specifically, it took eight years, 17 races, and 530 laps for the Watertown, CT native to break through at the 1/4-mile bullring and claim his first-career win at Silver Dollar Speedway. In the grand scheme of things, it marked nine wins in 2021 for the Big Game Motorsports #2 and gave Gravel 67 career wins with the Series, which moves him into 13th on the All-Time Wins List.

To get the job done, Gravel had to outlast Colby Copeland, Sheldon Haudenschild, and Brad Sweet through an intense four-war war for the top spot. He became the fourth and final leader on Lap 17, then survived lap traffic and the final restart to score the victory by 1.202-seconds.

“Man, I’ve been coming here for a long time,” Gravel said on his Silver Dollar history. “I’ve always struggled to qualify well here, but we timed in good tonight and that put us in a solid position. We’re constantly learning, I mean this is still our first year together. I think we’re really growing and everyone is meshing between Tod [Quiring], Cody [Jacobs], Trey [Bowman], and Scott [Vogelson]. Feels great to finally get a win here, especially in such an exciting race.”

Before Gravel’s glory, the spotlight was shined brightly on Colby Copeland of Roseville, CA. The 29-year-old, in his 17th World of Outlaws start, earned the pole position and put the country on upset alert as he eyed his first-career victory.

Copeland shot to the lead of the 35-lapper and controlled the opening 10 laps aboard the Laramie #16A. However, intense traffic created chaos and allowed outside polesitter Sheldon Haudenschild to close and eventually put the NOS Energy Drink #17 to the point on Lap 11.

Haudenschild’s reign was short-lived as he, Copeland, and Brad Sweet took each other three-wide the next time by. Copeland slid through the middle across Haudenschild’s nose and Sweet capitalized, nailing the bottom and rolling on past to lead Lap 12.

Sweet’s shot at the top lasted two whole laps before Copeland built his momentum and whipped back by on the cushion. He would lead another three circuits before fifth-starting Gravel appeared from nowhere and drove by them all on the low line as Lap 17 clicked off.

The remains of lap traffic and the final restart with eight laps to go tried to derail Gravel, but he was not to be denied as he drove away with his first-career Silver Dollar triumph to kick off the Gold Cup.

“Tomorrow being 40 laps is pretty close to tonight’s length,” Gravel thought on track conditions. “I really hope they can give us the same surface, it was awesome. I think in open track the top was better, but traffic was crucial tonight and I hit the bottom at the perfect times behind those guys. Hopefully, we put on another awesome show tomorrow night.”

Shattering his former career-best finish (13th) with the World of Outlaws, Roseville’s Colby Copeland crossed the line with a second-place effort and received a standing ovation from the Chico crowd as the leading Californian.

“Any driver when you lead laps you want to win, so there’s a bit of disappointment there,” Copeland noted. “But these guys are the best of the best. I’m out there ripping and they give their extra 10% and start blowing by me. It’s a whole different pace out here. I felt like we raced good, though. It was a lot of fun and all I can ask for is the same speed tomorrow night.”

“It was a great race track tonight, I thought,” Sweet said. “We were just a little off with the setup, but we have something to build on for tomorrow. Hopefully, we can come back and get us a Gold Cup.”

Closing out the top-five on Friday night was Sheldon Haudenschild in the fourth spot and Kraig Kinser with his fourth top-five finish of the year.

UP NEXT (Sat): The World of Outlaws NOS Energy Drink Sprint Car Series return to Chico, CA’s Silver Dollar Speedway tomorrow, Saturday, September 11 for the finale of the 67th Gold Cup Race of Champions. If you can’t be here, you can watch Every Lap LIVE on DIRTVision.