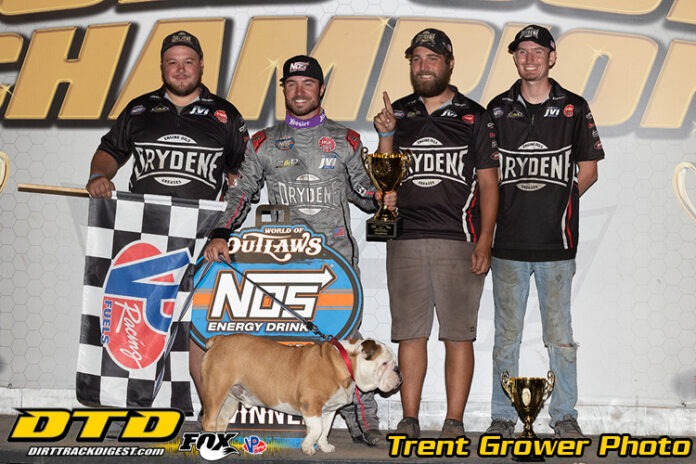 CHICO, CA – Saturday’s 67th Gold Cup Race of Champions had just a little bit of everything at Silver Dollar Speedway.

The intensity was overwhelming; the vengeance tasted sweet; the heartbreak felt sour; the elation was pure.

In the end, the hardware went to the Hanover Gang as Schuchart used a little bit of luck to get the lead and then a whole lot of determination to fend off Sweet’s late-race efforts at the Chico, CA 1/4-mile bullring.

“It’s pretty awesome to win such a prestigious race like this in California,” Schuchart said to a nearly sold-out crowd. “Being a Pennsylvania boy growing up out there we’re not used to this kind of stuff, but it’s something I’ve grown accustomed to being on the road and all these different tracks. It’s awesome to get back up here in victory lane.”

For Schuchart, his Gold Cup victory is even sweeter considering the preliminary fireworks. He failed to complete a single lap in Friday’s Feature following contact with fellow full-time Outlaw Brad Sweet, which resulted in a brief post-race altercation. Only 24 hours later and the duo was exchanging sliders for the win.

“Sometimes I wish it was like the NHL and they’d just put us on the front stretch,” Schuchart spoke openly. “I’m happy we got this win the right way, though. Didn’t do anything dumb or put ourselves in a bad spot, we just raced hard the way it’s supposed to be. Winning is the best form of payback.”

Kasey Kahne of Enumclaw, WA, and Tanner Carrick of Lincoln, CA owned the spotlight first, though. Both drivers in pursuit of their first-career World of Outlaws win led laps and Carrick specifically was in a position to stun the Outlaws at one of his home tracks.

In only his third career World of Outlaws start, the 19-year-old drove by Kahne to lead Lap 9 and was more than ready for a challenge when Sweet passed him on Lap 21. He promptly got up on the wheel and slid right back by the reigning champion and continued to lead four more circuits until disaster struck.

With his tail tank rattling loose and falling off the #83T, Carrick was sent to the work area on Lap 26 and had his chances at a monumental victory ripped away in a devastating fashion.

Schuchart was gifted the lead and proceeded to go slider-for-slider with Sweet until he established command with ten to go. The duo ran through lap traffic down the stretch and it came down to a last-lap bonzai into turn one, which fell just short for Sweet and gave Schuchart a 0.954-second margin of victory.

Capitalizing on Sweet’s hail mary attempt, James McFadden slid by his Kasey Kahne Racing teammate on the final lap to give the Karavan Trailers #9 a second-place finish.

“That was fun,” McFadden excitedly said. “You have to be committed to the top, but there are monster holes and big ledges out here, so it’s a bit sketchy and I like that. I’ve watched this place a ton and played it on the video game, so it’s cool to finally be here and run well. We’ve got a lot of confidence in this team lately.”

For Brad Sweet, who hails from nearby Grass Valley, his wait for the elusive Gold Cup will have to wait another year.

“I think both nights we were just one corner away from winning,” Sweet said. “That’s on me. I need to step up and make some better moves. That was good, hard racing, though, and I’m sure the fans were excited. I hated giving up second on the last lap, so that’s a bit disappointing. One of these years I’ll get a Gold Cup.”

Rounding out the top-five on Saturday night was 10-time champion Donny Schatz in the Tony Stewart/Curb-Agajanian Racing #15 and early leader Kasey Kahne in the Roth Motorsports #83.

Closing out the top-10 in the 67th running of the Gold Cup was Foresthill, CA’s Ryan Robinson with a career-best sixth, Jason Johnson Racing pilot Carson Macedo in seventh, former Outlaw winner Kyle Hirst in eighth, Sheldon Haudenschild in ninth aboard the NOS Energy Drink #17, and Kraig Kinser in the tenth spot.

UP NEXT (Sat): The World of Outlaws NOS Energy Drink Sprint Car Series will conclude the west coast swing next Saturday, September 18. The Greatest Show on Dirt will compete for a $21,000 top prize in the Tom Tarlton Classic at Hanford’s Keller Auto Speedway. Fans can BUY TICKETS HERE or watch from home on DIRTVision.