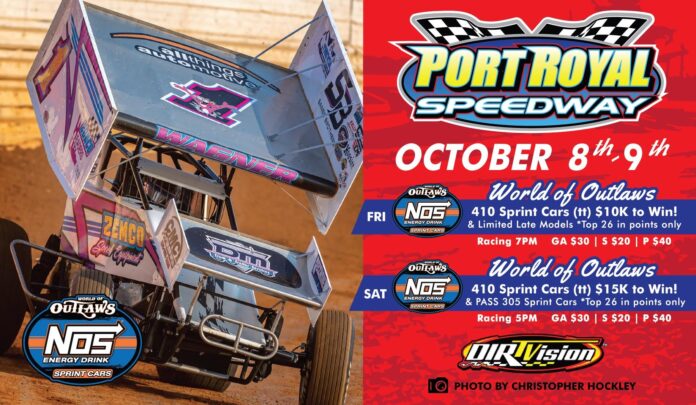 PORT ROYAL, PA – After a nearly month-long hiatus, Port Royal Speedway will continue with their 2021 racing season with a two-day visit by the NOS Energy Drink World of Outlaws Sprint Car Series Friday and Saturday October 8-9 for the Nittany Showdown.

This will be the fourth consecutive season where the Outlaws will attempt to visit for a two-day event, and it’s expected that a large field of cars will trek to Juniata County for a chance to take home the victory and the bragging rights against the best the sport has to offer.

Last year’s event saw NASCAR start Kyle Larson sweep the weekend to close out what was a dominating season on dirt for the California kid. Larson’s winning ways also put a stop to what had been three consecutive event victories for World of Outlaws legend Donny Schatz at ‘The Speed Palace’ entering the 2020 season.

Logan Wagner already locked up the Weikert’s Livestock 410 Sprint Car track championship for the fourth consecutive season at the speedway and he will be looking for his first career Outlaw triumph. He enters as the most-recent winner at the Speedway as he picked up the 54th Annual Tuscarora 50 win worth $54,000 in early September.

It is also expected that several other outsiders will make the trek to the Juniata County oval such as Brian Brown, Justin Henderson (Huset’s Track Champion), Gio Scelzi, Rico Abreu, Aaron Reutzel and many others as well.

To go along with the PA Posse vs the Outlaws rivalry, the Outlaws points battle is also still up for grabs entering the weekend. Currently Brad Sweet holds a 128-point advantage in the standings over David Gravel and a 142-point advantage over most recent winner Carson Macedo. Donny Schatz (-204) and Logan Schuchart (-292) make up the top five.

Sheldon Haudenschild, James McFadden, Kraig Kinser, Brock Zearfoss and Jacob Allen complete the top ten. Kasey Kahe\ne will also be in attendance as he continues to finish off the 2021 season behind the wheel of the Roth Motorsports No. 83.

This would be the third career championship for Sweet if he is to hold on. A strong run in Central Pa. would do wonders in his quest as the field will be as tough as anywhere and points are crucial.

Reserve Seats ($35) are still available for the weekend and are on sale through the World of Outlaws website. The entire main grandstand towards turn 1 will be reserved seating and the top five rows of the new grandstand are as well. Everything else is general admission and season reserved seats will be honored for both nights.

Ticket prices and times are as follows-

Camping will also be available for $30 for the weekend (dry spots). Those spots require no reservation and are on a first come first serve basis. Camping is open at noon on Thursday, October 7th, and all campers must exit the ground by Noon the day after racing concludes.

There will also be a Cornhole Tournament being held Saturday. It is the 4th Annual Port Royal Speedway Cornhole Classic. It is rain or shine and will be held in the commercial building right inside the front stretch gates. Registration is from 9:30am to 10:30am and the tournament will start at 10:45 am.

It is double elimination and is a bring your own partner event. If you need a partner, they can try and find you one. Entry fee is $40/team and a payout is guaranteed to the top four teams. The event is BYOB (Bring your own beverages and bags. House bags can be provided if needed. Proceeds from the tournament will benefit the Rayce Rudeen Foundation.