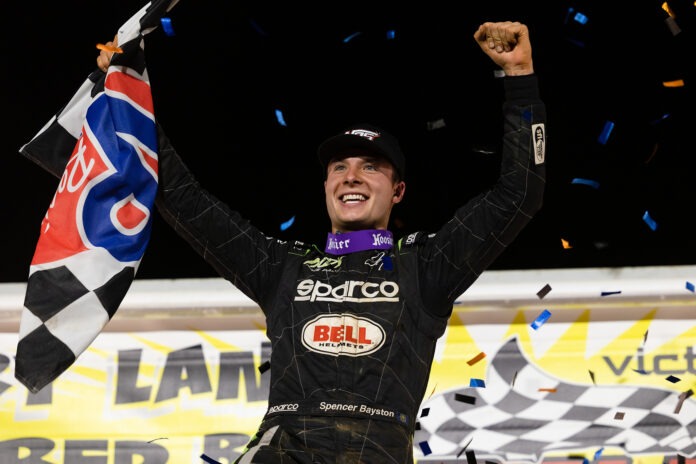 The newly-minted partnership was dominant in only their fourth start together, sending a statement as they prepare to go full-time with the World of Outlaws NOS Energy Drink Sprint Car Series in 2022.

For the 23-year-old Lebanon, IN native it was a win that solidified his decision to join CJB, and in a way, was almost bigger than his first-career win which came earlier this summer at Attica Raceway Park.

Silencing the doubters with a monster 4.750-second lead at the checkered flag, Bayston beat superstars David Gravel and Donny Schatz to the line for a $15,000 payday in the Nittany Showdown at The Speed Palace.

Five more races remain in 2021, but this team is chomping at the bit for next year to arrive as Bayston chases the Kevin Gobrecht Rookie of the Year Award and Chad Clemens and Barry Jackson look to build CJB back into a nightly threat against The Greatest Show on Dirt.


“These guys did a flawless job all night,” Bayston said on his new crew.”We’re hungry for next year. They’ve been working hard and actually changing a lot of stuff to get ready. We’re re-molding this team back into the successful shape it deserves to be in. Hopefully tonight is the start of something new. Happy for Barry, Chad, our new partners at Signing Day Sports and JRC Transportation. Looking forward to the rest of this year, and especially next year.”

For Carlisle, PA-based CJB Motorsports, it’s their first World of Outlaws win in more than two years since Shane Stewart parked the #5 in victory lane at Nashville Fairgrounds Speedway. They were not to be denied on Saturday night, earning Slick Woody’s QuickTime in Flight A, winning their Team Drydene Heat Race, scoring the DIRTVision Fast Pass Dash, and dominating all 30 laps of the NOS Energy Drink Feature.

It was another big night for David Gravel and Big Game Motorsports, who drove from eighth to second in the Nittany Showdown finale. More importantly, they cut another 20 points off Sweet’s championship advantage and now sit only 92 points behind with five races remaining.

“I can’t win a damn race here, but man I love this place,” Gravel mentioned on his Port Royal podiums. “I think a 40-lapper would’ve been more interesting, I just never had a chance at Spencer. This was the best we’ve been all weekend, though. Cody [Jacobs] kept working on it and delivered in the Feature.”

10-time Series champion Donny Schatz earned KSE Hard Charger honors with a 12th-to-third run in the Ford Performance, Carquest #15. It was another big points night as the Tony Stewart/Curb-Agajanian Racing #15 now only sits four points behind Carson Macedo and Jason Johnson Racing for the third spot in the championship standings.

“Pretty solid finish,” said Schatz. “We made some improvements and learned a lot in the Feature. We changed engines after the Heat Race and that was a good call. This team keeps digging and we’re getting better.”

Friday’s winner Kerry Madsen finished fourth in the Nittany Showdown finale aboard his Tony Stewart/Curb-Agajanian Racing #14. Pennsylvanian Jacob Allen earned his third top-five finish of the season with a fifth-place bid for the Shark Racing, Drydene Performance Products #1A.

UP NEXT: The World of Outlaws NOS Energy Drink Sprint Car Series will take a weekend off before resuming the 2021 season on Friday, October 22 with the FVP Platinum Battery Showdown at Lakeside Speedway in Kansas City, KS.