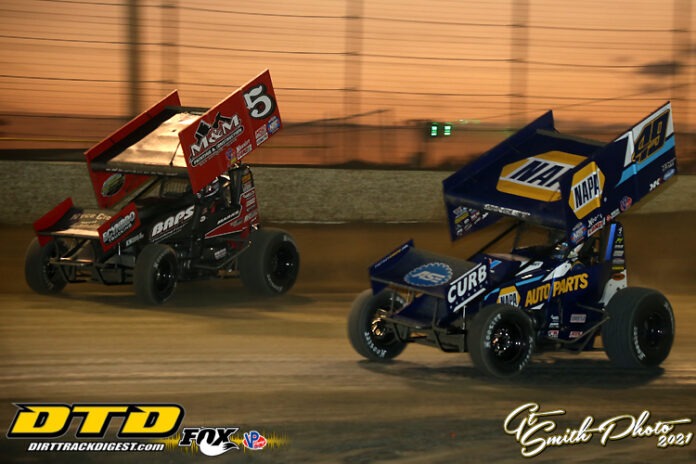 BARBERVILLE, FL – After a 96-day off-season, the wait is finally over. It’s race week.

The World of Outlaws NOS Energy Drink Sprint Car Series opens the 2022 season in traditional fashion at Volusia Speedway Park’s DIRTcar Nationals for the 18th consecutive year. The six-night “Sprint Week” at the Barberville, FL 1/2-mile is headlined by The Greatest Show on Dirt from Thursday-Saturday.

Ahead of the 51st annual event, let’s dive into the names and faces you can expect to see chasing some Golden Gators this week, and the full roster of 14 full-time drivers this season.

FOUR-PEAT: For the third consecutive year, all targets are pointed at the backs of Brad Sweet, Kasey Kahne Racing, and the NAPA Auto Parts #49. In 2021, The Big Cat steered his Maxim/Kistler entry to a third straight championship with the tremendous trio of Eric Prutzman, Joe Mooney & Andrew Bowman staying on the crew. His achievement put him alongside legends Steve Kinser and Donny Schatz as the only drivers to ever record a three-peat.

The attention now turns to the fourth title for the Grass Valley, CA native, who kickstarts that title defense at one of his best tracks. With six of his 74 wins coming at Volusia, the Barberville, FL 1/2-mile is tied with Cedar Lake as the winningest track of Sweet’s career. He’ll try to snatch some more wins this week with his third DIRTcar Nationals championship on the line.

BACK TO BUSINESS: When it comes to Donny Schatz and Tony Stewart/Curb-Agajanian Racing all that matters is winning. After a strenuous research & development program, the powerhouse #15 team believes the Ford Performance 410 engine is as strong as ever entering the 2022 season; providing the 10-time Series champion with his next chance at returning to the mountaintop.

The Fargo, ND native has decked out the Advance Auto Parts, Carquest #15 in his favorite colors, and starts the season at one of his best tracks this week. When it comes to Volusia, nobody can muster the numbers to touch Schatz’s. He’s won 13 World of Outlaws Feature at the Florida facility (more than double Sweet at 6) with a record total of 22 DIRTcar Nationals wins.

BUILDING CHEMISTRY: Three of last year’s breakout teams are all back together and ready to re-launch a new attack on taming their first-ever championship with the World of Outlaws Sprint Car Series.

David Gravel and Big Game Motorsports immediately clicked in 2021, rattling off 11 wins as DG earned a career-best championship runner-up. The Watertown, CT native has reigning Crew Chief of the Year Cody Jacobs back on the wrenches and full backing from Tod Quiring on the Huset’s Speedway #2. The Florida resident has scored an All Star win at Volusia but still chases his first World of Outlaws win at the track, which would give him 70 on his career.

Filling Gravel’s spot at Jason Johnson Racing and exceeding expectations in year one was Carson Macedo, who also scored 11 wins with a career-best third-place championship effort in 2021. The Lemoore, CA native has developed into a nightly threat with ace Phil Dietz calling the shots on the #41. The 25-year-old enters Volusia as the most recent winner following an impressive 10th-to-first charge last March at VSP.

Statistically, Sheldon Haudenschild put together a career year in 2021 by setting personal bests with eight wins, 296 laps led, and 23 podium finishes. The Wooster, OH native goes into his fifth season aboard the Stenhouse Jr. Marshall Racing, NOS Energy Drink #17 with high hopes since retaining crew chief Kyle Ripper. The DIRTcar Nationals means Lil’ Haud returns to the site of his first-career win which came at Volusia during the 2018 season opener.

COAST-TO-COAST: After competing in Sunday’s groundbreaking Clash at the Coliseum, two of Hendrick Motorsports’ top stars in the NASCAR Cup Series flew from LA back east to get their Sprint Car fix this week at the DIRTcar Nationals.

Kyle Larson & Paul Silva will unload the revered #57 for the first time this week at a place the reigning NASCAR champion has yet to conquer. The Elk Grove, CA native has scored wins at 89 different dirt tracks worldwide, yet the Barberville, FL 1/2-mile is not on that list. Sandwiched between his 24 World of Outlaws wins is seven DIRTcar Nationals top-10 finishes, but Yung Money still vies for that first Volusia victory this week.

Alex Bowman will make his World of Outlaws Sprint Car Series debut this week aboard his own Ally Racing #55. The Hendrick Motorsports star began dabbling in 410 competition last year and prepares to hit it even harder in 2022 as he challenges himself with a new discipline. The Tucson, AZ native has 10-time World of Outlaws winner Joe Gaerte on the wrenches of his ride.

GATORS OR SHARKS: The defending DIRTcar Nationals champions, Shark Racing, will try to earn back-to-back Big Gator Championships for the first time since the trophy was introduced a decade ago. Together, Logan Schuchart and Jacob Allen are preparing for their ninth season with the World of Outlaws.

Logan Schuchart was unstoppable at Volusia last February, recording a win with the All-Stars and World of Outlaws as the #1S scored a dominant DIRTcar Nationals title. The Hanover, PA native is back at the 1/2-mile to kickstart his 2022 season with Duramax aboard the new-look ride. After falling to fifth in the standings following a runner-up effort in 2020, the 30-time World of Outlaws winner is more motivated than ever to return to form.

Jacob Allen is ready for a fresh 90-race slate and that’s exactly what he’ll get this week down in Florida. The son of Bobby Allen has a new look and new attitude in 2022 as his design pays tribute to his legendary father all year long. The #1A led the first eight laps of the season last year at Volusia and heads into this week eyeing a second career win.

SOPHOMORE SURGE: After starting last year’s Rookie of the Year class with a stout foursome, only two of the drivers survived to make it to a sophomore season with the World of Outlaws.

James McFadden of Alice Springs, NT, AUS returns for his second season, but in a new place as he joins Roth Motorsports to pilot the famed #83. J-Mac is coming off one of the best rookie campaigns in history with a pair of wins and a seventh-place championship effort in his lone year in the Kasey Kahne #9. He’ll retain Justin Adams as his crew chief as the duo goes their first Volusia victory together this week.

Brock Zearfoss of Jonestown, PA brings the Moose’s LZ Bar & Grill #3Z back on tour following a trying, but rewarding freshman season. The 2017 World of Outlaws winner battled through the trials and tribulations of an 80-race run and hit paydirt in last year’s finale with a season-best of second at World Finals. He and crew chief Shane “Noisey” Bowers will try to keep that momentum rolling into 2022.

WELCOME TO THE SHOW: The 2022 Kevin Gobrecht Rookie of the Year Award will be decided over the course of a grueling 88-race schedule between the three newest full-time drivers. The trio in contention for top rookie honors include:

41-year-old Kasey Kahne of Enumclaw, WA fulfills a lifelong dream of joining the Series full-time in 2022. The former NASCAR Cup Series star will pilot his own Kasey Kahne Racing, Karavan Trailers, FuelMe #9 this year with his first-career win still on the line.

23-year-old Spencer Bayston of Lebanon, IN moves to the potent CJB Motorsports #5 operation with Barry Jackson on the wrenches. From on the couch to in the seat, this former USAC Midget champion suddenly rekindled his career last year with two World of Outlaws wins and quickly proved he and CJB could be a lethal combination.

18-year-old Noah Gass of Mounds, OK is diving into the deep end, set for a full-time bid with only 25 World of Outlaws appearances under his belt. He and crew chief Cody Cordell are focused on spending this year getting the teenager acclimated with different tracks, the grind of the schedule, and learning against the best of the best.

As far as Volusia goes, Kahne & Bayston have previous experience but Gass will be going in blind during his debut. Kahne won a 2002 DIRTcar Nationals Feature with the All Stars, while Bayston is trying to top his personal best of 16th at VSP.

VETERAN PROWESS: Behind Schatz, only two other full-time World of Outlaws competitors have 1,000 Features under their belt, and they’ve both won at Volusia Speedway Park.

Jason Sides of Bartlett, TN is bringing the classic #7S back for a full slate in 2022. Double Down won a 2011 World of Outlaws show at the Volusia 1/2-mile.

Kraig Kinser of Bloomington, IN has re-designed the #11K with a red flare to his Mesilla Valley Transportation ride. The 2005 Knoxville Nationals champion also scored a Volusia win that year in All Stars competition.

ALL-STAR INVASION: With the All Star Circuit of Champions conducting Tuesday & Wednesday’s show at Volusia, you’ll see several of their top stars stay in town to compete with The Greatest Show on Dirt from Thursday-Saturday.

Reigning ASCoC champion and Kings Royal winner Tyler Courtney will be in attendance with the Clauson-Marshall Racing, NOS Energy Drink #7BC. Sunshine set his VSP career-best last year with a sixth-place effort.

Cory Eliason, a two-time World of Outlaws winner with Roth Motorsports, continues his stint in the Rudeen Racing #26. The Visalia, CA driver has recorded his best Volusia finishes (3rd in 2020, 3rd in 2021) driving for Kevin Rudeen, the newest owner at Skagit Speedway.
Justin Peck of Monrovia, IN is back in the Buch #13 for a second All Star season and it starts in Florida this week. The 23-year-old collected his first-career World of Outlaws podium finish last year at Kokomo (IN) and now eyes that first victory in 2022.

USAC Sprint Car superstar Kevin Thomas Jr. is making the transition to winged racing as he aligns with Snow Racing for a full All Stars slate this year. KTJ has four World of Outlaws starts with one top-10 finish ahead of his Volusia debut this week.

Kerry Madsen, who built a resurgent 2021 campaign with three World of Outlaws wins in the Tony Stewart #14, will drive the Sam McGhee Motorsports #11 all week long as a substitute for Parker Price-Miller as he continues his battle against Non-Hodgkins Lymphoma.

OFF THE PORCH: Three of the PA Posse’s finest have made their annual trip south to start the season at the DIRTcar Nationals.

WILD CARDS: Beyond the full-time Outlaws, the All Star regulars, and the Posse’s bunch, you’ve got your wildcard invaders to think about at the DIRTcar Nationals this week.

Blackjack Brian Brown (5 career wins) is bringing his familiar FVP Parts, Casey’s General Stores #21 to Volusia with hopes of earning his first podium finish at the 1/2-mile.
Clute, TX’s Aaron Reutzel (6 career wins) continues his stint in the RSR #8 with Tyler Swank on the wrenches. He’s a former All Star winner at Volusia, attempting to pass Gary Wright as winningest Texan in Series history.

Giovanni Scelzi (3 career wins) will launch a hefty 60+ race schedule with the World of Outlaws this week as he returns to the seat of the KCP Racing #18 at Volusia, where he finished third last March.

Sam Hafertepe Jr. (1 career win) is taking the #15H back to Volusia for the first time since leading the opening 25 laps and finished second in last year’s March visit to the 1/2-mile.
Missouri’s Ayrton Gennetten and New York’s Paulie Colagiovanni, who each had breakout moments with the Series last year, will be making their Volusia debuts this week as they attend their first DIRTcar Nationals in Florida.