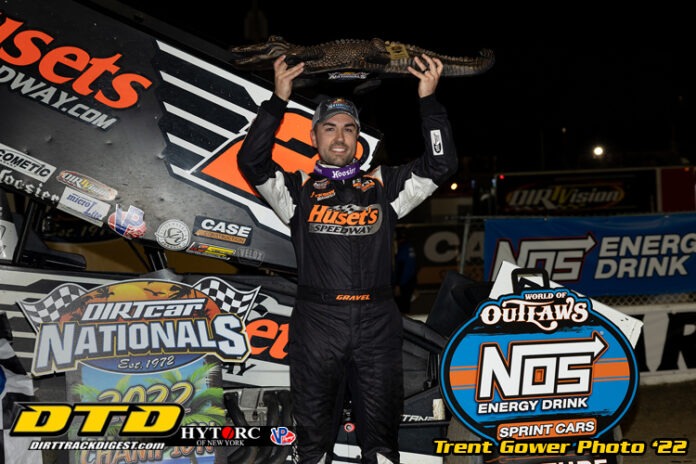 Following up finishes of fourth on Thursday and second on Friday, David Gravel put the ultimate exclamation point on his DIRTcar Nationals title with a downright dominating victory in Saturday’s Feature at Volusia Speedway Park. For his unrivaled performance over three nights, Gravel secured his second-career Big Gator Championship.

Earning the pole position with a DIRTVision Fast Pass Dash win, Gravel took the green flag, set the cruise control, and never let go until the Huset’s Speedway #2 crossed the checkered flag with a 1.114-second margin of victory. It was a big bounceback win for Tod Quiring’s operation, which is headed by reigning Crew Chief of the Year Cody Jacobs along with Trey Bowman & Zach Patterson.

The victory, which was Gravel’s first in World of Outlaws competition at Volusia and in Florida, came just 24 hours after losing a heartbreaker to Sheldon Haudenschild by 0.044-seconds. That was with only three shocks, though, and then they proved how lethal they were with a fully operational beast.

Another eight months and 85+ races remain in the 2022 campaign, but this is no doubt the hottest start of Gravel’s career and arguably the most potential he’s had when it comes to putting all the pieces together to record that first career championship.

“This deal is hard, you know there’s a reason why there are only 10 champions in World of Outlaws history,” Gravel spoke on the early-season title outlook. “I’ve never done it before and I’ve been on the road since 2013 just learning every single season. We have to take it one race at a time. It’s definitely a confidence builder, but we realize this place is unique and unlike other places we’ll see.”

“It’s no doubt, though, that I’ve got one of the best car owners in the business and we’ve got a really good team on the road. I’m excited to really get into the swing of things.”

After starting on the outside pole, Kraig Kinser of Bloomington, IN chased Gravel for the opening half and was making headway in trying to track him down until the right rear let loose and sent the #11K careening into the wall on Lap 15.

From there, Brent Marks of Myerstown, PA assumed the runner-up and never let it go as he crossed the stripe with a Volusia career-best of second-place. It’s a strong start for the seven-time World of Outlaws winner who will embark on a true outlaw schedule – including 40+ dates with The Greatest Show in Dirt – in 2022 with the Murray-Marks #19.

“We had a really good car, but not as good as David,” Marks mentioned. “We needed more lap traffic to get to him. It’s been an amazing adventure so far with Murray-Marks, though. I normally struggle here so to run second-place tonight is pretty well for us.”

Rounding out the podium was James McFadden of Alice Springs, NT, AUS with a season-best third-place run in the Roth Motorsports #83.

“Getting this new deal with Roth Motorsports on the podium so quick is awesome for us,” McFadden said. “It’s a privilege for me to come over and race in front of a crowd like this. We just have to keep taking advantage and building our momentum to chase the championship.”

Closing out the top-10 on Saturday night at Volusia was Donny Schatz, Cory Eliason, Giovanni Scelzi, Logan Schuchart with a 22nd-to-ninth KSE Hard Charger run, and Carson Macedo in the tenth spot.

UP NEXT – The World of Outlaws NOS Energy Drink Sprint Car Series will enjoy next weekend at home before taking The Greatest Show on Dirt to the dirty south for a trip to Magnolia Motor Speedway in Columbus, MS on Friday, February 25, and The Rev in Monroe, LA on Saturday, February 26.