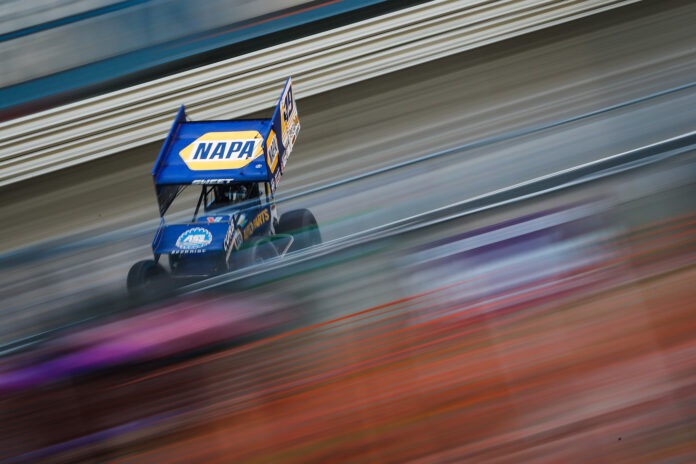 PAIGE, TX – After a three-week hiatus, the World of Outlaws NOS Energy Drink Sprint Car Series regulars are chomping at the bit to get back on track and get into the swing of the 90-race schedule.

That opportunity comes this weekend with a Texas Two-Step planned for The Greatest Show on Dirt at Cotton Bowl Speedway in Paige, TX on Friday & Saturday, March 4-5.

The Series has visited the paperclip 1/3-mile on four previous occasions with victories split between full-timers Brad Sweet (2016, 2021), David Gravel (2018), and Sheldon Haudenschild (2021). That trio of Sweet, Gravel & Haudenschild, along with Donny Schatz & James McFadden, currently make up the top-five in the early season championship standings.

For fans unable to attend this weekend’s doubleheader, you can watch every lap live with the DIRTVision FAST PASS.

Here’s what to watch for ahead of the fourth and fifth race of the season:

THE BEST CAT: Through four CBS visits, nobody has stood out quite like The Big Cat Brad Sweet. The three-time and defending Series champion has never finished off the podium, recording two of his 74 career wins at Cotton Bowl and running second & third when he’s not on the top step.

The Grass Valley, CA native has led laps in three of four events, including the memorable Series debut at Cotton Bowl in 2016 when he passed then Kasey Kahne Racing teammate Daryn Pittman in the final corner of the final lap to steal the win.

Following a whirlwind DIRTcar Nationals, which saw a near DNF and a late-race loss at Volusia, the NAPA Auto Parts #49 team is extra motivated to chalk one up in the W column this week.

PAIGE PROWESS: Beyond Sweet, the next tier of Cotton Bowl’s finest highlights these five gentlemen who have never finished outside of the top-10 at the Paige, TX facility.

Donny Schatz of Fargo, ND has scored World of Outlaws wins at four different Texas tracks (Devil’s Bowl, Royal Purple, Battleground, Lone Star), but he’s yet to conquer Cotton Bowl. The 10-time Series champion enters with a career-best of fifth at CBS, a mark that the driver of the Tony Stewart/Curb-Agajanian Racing, Ford Performance, Advance Auto Parts #15 hopes to top this weekend following a strong start to his year in Volusia.

David Gravel of Watertown, CT has the championship lead for the first time in his career following runs of fourth, second, and first at Volusia. The driver of the Big Game Motorsports #2 has split his 70 career World of Outlaws wins between 40 different tracks, including Cotton Bowl where he led from green to checkered back in 2018.

Logan Schuchart of Hanover, PA has mastered the Devil’s Bowl (Mesquite, TX) 1/2-mile with three consecutive wins to his credit, and now he wants a piece of Cotton Bowl’s 1/3-mile. The star of the Shark Racing, DuraMax #1S has earned results of seventh, tenth, tenth, and sixth in four starts at the Paige property.

Sheldon Haudenschild of Wooster, OH transitioned to Stenhouse Jr. / Marshall Racing in 2018, and since then has finished eighth, first, and fifth at Cotton Bowl. The NOS Energy Drink #17 already topped a spectacular finish on night two at DIRTcar Nationals, and now looks to become the first repeat winner of 2022 at a place he also won at last year.

James McFadden of Alice Springs, NT only has two appearances at Cotton Bowl but made the most of them in 2021 with runs of eighth and tenth. The Australian is off to a hot start in 2022, making the most of his move to the Roth Motorsports #83 and getting his sophomore surge going.

HOME COOKING: Taking advantage of a rained-out trip to Mississippi and Louisiana, Carson Macedo of Lemoore, CA stayed close to home last weekend and kept his skills sharp in the cockpit. The Jason Johnson Racing superstar traded the #41 for the Tarlton #21 and promptly beat Kerry Madsen & Shane Golobic to win the Dave Helm Memorial at Hanford’s Keller Auto Speedway, where the World of Outlaws will race on September 16.

The 25-year-old championship contender returns to the JJR, Albaugh #41 this weekend where redemption is on the line at Cotton Bowl. Last year’s Texas Two-Step was a bit of a damper for them with lackluster runs of 11th and 13th made worse by a destroyed car in the DIRTVision Fast Pass Dash.

ROOKIE RACE: The battle for the 2022 Kevin Gobrecht Rookie of the Year Award kicked off in Florida with Spencer Bayston (CJB #5), Kasey Kahne (KKR #9), and Noah Gass (#20G) launching their inaugural full-time runs. This weekend’s Texas Two-Step offers familiarity for some and brand-new territory for others.

Kahne, who has recovered from a vicious crash at Volusia, is ready to get back on track at Cotton Bowl, where the Washington native earned a seventh-place finish in 2018. Bayston is making his first appearance at the track but has the aid of crew chief Barry Jackson, who was a podium finisher last year at CBS with Brent Marks behind the wheel. For Gass, it’s the second of a laundry list of facilities that he’ll attend for the first time as his learning curve steepens against the best of the best steepens.

LONE STAR LOYAL: Two former full-time Outlaws from Texas will be in action this weekend with a chance to defend their home turf. Both Aaron Reutzel of Clute, TX, and Sam Hafertepe Jr. of Sunnyvale, TX were born and raised in the heart of Texas and continue to carry that Lone Star State pride at the top level of Sprint Car racing.

Neither driver has yet to win at the Paige, TX 1/3-mile, but both have come close with second-place results in the ASCS 360 Sprint Car ranks. Reutzel has built a formidable operation with Tyler Swank on the wrenches of the Mobil 1, RSR #8, and a Toyota Racing Development engine under the hood, while Hafertepe continues to be a proven threat aboard the Hill’s Racing #15H.

STAT PACK: A few noteworthy stats to follow this weekend at Cotton Bowl include…

The existing track record is 13.356 seconds by Aaron Reutzel on 3/19/21.
The starting position of the four winners includes sixth, first, fifth, second.
The closest margin of victory is 0.162-seconds between Sweet & Pittman in 2016.
David Gravel’s 2016 win is the only race that did not feature a lead change.
+11 (Carson Macedo & Wayne Johnson in 2021) is the most of any Hard Charger.
TEXAS TRADITION: The World of Outlaws has always shared a special connection with Texas, where founder Ted Johnson launched the Series in 1978. Over the course of 45 seasons, the state has hosted 203 races with 36 different winners, including legends like Steve Kinser (48 wins), Sammy Swindell (38 wins), and Mark Kinser (13 wins) at the top and notable active drivers like Donny Schatz (7 wins), Brad Sweet (3 wins), Logan Schuchart (3 wins) & David Gravel (2 wins) leading the current crop.