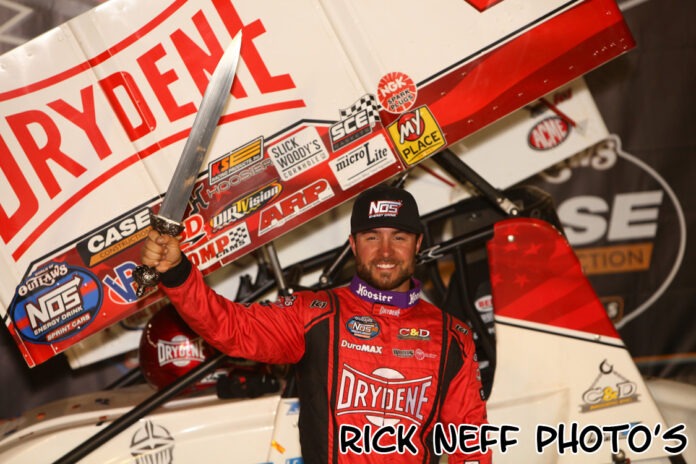 The DuraMAX, Team Drydene #1S was the class of the field on Friday night as the World of Outlaws NOS Energy Drink Sprint Car Series returned to The Last Great Colosseum to kickoff a Bristol Bash doubleheader. Schuchart recorded the second clean sweep of the 2022 season with the first occurrence coming earlier this month from none other than his Shark Racing teammate, Jacob Allen.

The Hanover, PA native set Slick Woody’s QuickTime, topped his NOS Energy Drink Heat Race, ruled the MicroLite Dash, and then outran Aaron Reutzel in the opening stages of the 25-lap Feature. Schuchart officially crossed the finish line with a 1.369-second advantage, but his lead had ballooned to nearly 3+ seconds at one point.

It was a much-needed confidence boost and a sigh of relief for Schuchart and the Shark camp, who finally got their first win of the season in the 16th event. They started the season with an average finish of 10.6 and zero podium finishes in the first 12 shows, but now they’re on fire with four-straight top-fives and a recent average of 3.0.

With his win, Schuchart officially passed his grandfather and team owner, Bobby Allen, for 20th on the All-Time Win List with his 31st career World of Outlaws win. Tomorrow, he’ll have a chance to do what David Gavel did last year and score a clean sweep of the Bristol Bash weekend.

“It’s just nice to be back in victory lane itself, let alone at a place like this,” Schuchart told media afterward. “We rolled out of the box feeling great after yesterday and just wanted to make some small tweaks today, and they worked perfectly. The first part of this year was a real struggle, but we’ve been gaining momentum.

“I don’t want to say we’ve figured it out, there will still be some struggles, but if you look at our recent runs we’re shining at places we haven’t before. We’re getting back to where we should. It’s tough with as many good teams as we have out here, you can second guess yourself in a heartbeat. I’m just thankful and fortunate to be winning races with my grandpa and the rest of my family. It’s special.”

Clute, TX native Aaron Reutzel extended his excellent Bristol Motor Speedway resume with his third podium finish in his third start at the Tennessee 1/2-mile. He led the opening lap of the 25-lapper and engaged in nailbiting wheel-to-wheel combat with Schuchart, but ultimately slid high and admittedly lost his shot at the win.

His second-place finish in the Ridge & Sons Racing, Mobil 1 #8 followed up his third and second-place runs from last year in the Roth Motorsports #83. The multi-time All Star Circuit of Champions has found a knack for the speed plant and looks to be a favorite for Saturday’s $25,000 finale.

“For some reason, I just really like these big 1/2-miles where you can run it straight and move all around,” Reutzel remarked. At places like Port Royal, Knoxville, and here, I just feel so comfortable. Unloading with such a stout car is the first piece of the puzzle and we’ve done that two years in a row with two different teams and two different crew chiefs.”

It wasn’t just Kraig Kinser’s first podium or his first top-five of the season, it was even his first top-10 of 2022 as he drove the #11K to a third-place effort. The run tied him with his legendary father, Steve Kinser, for the best family finish at Bristol Motor Speedway.

“To me, the history of the sport is just as big as what is going on today,” Kinser commented on matching his dad with a third. “It’s an accomplishment for sure. I wish I would’ve run second, that would be one of the few times I beat him in a category. I guess we’ll just have to do that tomorrow.”

Friday marked the second “perfect night” of the 2022 season with both coming from Shark Racing stars Jacob Allen at Lake Ozark Speedway and now Logan Schuchart at Bristol Motor Speedway.

UP NEXT (Sat) – The Bristol Bash concludes tomorrow, Saturday, April 29 with another doubleheader headlined by the World of Outlaws NOS Energy Drink Sprint Car Series and World of Outlaws CASE Construction Equipment Late Model Series. Another $25,000 payday is on the line for the fastest gladiator at Bristol Motor Speedway. Fans can BUY TICKETS HERE, or watch every lap LIVE on DIRTVision.