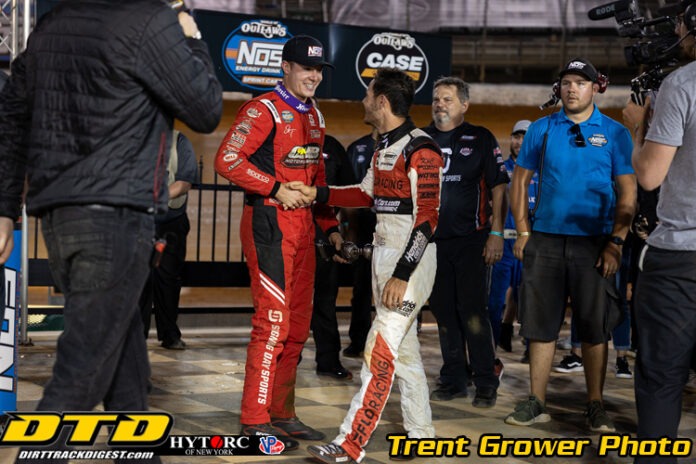 BRISTOL, TN – After several heartbreaking losses earlier this year, Spencer Bayston and CJB Motorsports were bound and determined to strike while the iron was hot on Saturday night at Bristol Motor Speedway, and that meant sending it into gaps that some never dare to enter.

The leading Kevin Gobrecht Rookie of the Year contender looked to have his $25,000 payday squarely tucked away on the final lap, but the first caution of the weekend flew and set up a green-white-checkered finish with Kyle Larson and Logan Schuchart hot on his heels.

It was a moment where The Last Great Colosseum shined as two gladiators went wheel-to-wheel for all the glory. Larson made his move down into turn one, but Bayston floored it and stuck the high side to fend off the first attempt. The second and most hair-raising moment came at the white flag as Larson launched his slider into turn three and took the lead, but Bayston never wavered and somehow squeezed his #5 between Larson’s right rear and the outside wall with only inches to spare.

The bold and brave 23-year-old was side-by-side with the reigning NASCAR Cup Series champion and led by 0.031-seconds as the white flag waved. Using his momentum from a full-throttle hail-mary on the outside, Bayston edged ahead and shot to the bottom of turn one to protect his lead on the last lap. He held on over the final 0.533-miles and scored the biggest win of his life in the process at the Bristol Bash.

“I’ve got all the respect in the world for Kyle [Larson],” Bayston said with his gladiator sword in hand. “He didn’t need to give me that little lane, but when I saw it open I was fully committed to sending it around the outside there. It was quite unnerving, but we’re standing in victory lane and that’s all that matters. It’s a high-speed, high-risk moment, but we came out with a high reward.”

The daring move banked Bayston a $25,000 payday (richest of his career) and his first win since joining the World of Outlaws NOS Energy Drink Sprint Car Series full-time with CJB Motorsports. The Lebanon, IN native scored his eight-straight top-10 and jumped to sixth in the championship standings after a stellar start to the season.

“This has been a long time coming,” Bayston added. “We’ve been so damn fast every night. Barry Jackson is doing a phenomenal job. I feel more comfortable in this CJB #5 than I have in my whole career in any other race car. This is a testament to the equipment that Chad Clemens provides and what Barry, Scott [Vogelsong], and Brendan [Collum] do with it. Winning at Bristol Motor Speedway is something I’ll never forget.”

Officially, Kyle Larson crossed the stripe behind Bayston by 0.762-seconds, but he was really only a matter of inches away from claiming his first win on the dirt version of Bristol Motor Speedway.

“I knew it was gonna be close,” Larson said in awe of Bayston’s move. “As I got closer to the top I could hear him and I thought ‘man, I don’t want to squeeze him into the fence we’re going way too fast for that.’ Once he snuck by and blocked me into turn one, I knew that was it. I wanted to give him the decision to either lift or take it, and he definitely took it. There are some drivers that won’t shoot that gap, but he’s young.”

All in all, it was a strong weekend for the Elk Grove, CA native, who believed he and Paul Silva made wholesale gains on the Finley Farms, HendrickCars.com #57.

“We’ve really struggled with raw speed on big 1/2-miles like this,” Larson noted on the car. “We made good strides this week, Paul definitely got some stuff figured out. We still aren’t the fastest car single speed-wise, but we’ve made huge improvements.”

Closing out the podium was Logan Schuchart, who continues to show immense speed aboard a rejuvenated Shark Racing, DuraMAX, Drydene #1S. He fell short of a weekend sweep at the Bristol Bash but certainly leaves Tennessee with his head held high with a third-place effort.

“What a great weekend for this team,” Schuchart said. “I feel like we had the best car all weekend and I’m proud of that. If I could’ve capitalized on that restart it might’ve been different. I don’t think Bayston had more than an inch between him, Larson, and the wall, so hats off to him. I had a front-row seat, but just couldn’t go at them after I spun the tires on the restart.”

The Hanover, PA native has rattled off five-straight top-five finishes and now prepares to head to his neck of the woods with more momentum available at places like Eldora (OH) next week and then a home-state week at Pennsylvania’s Lincoln Speedway and Williams Grove Speedway.

Spencer Bayston’s third career World of Outlaws NOS Energy Drink Sprint Car Series ties him for 73rd on the All-Time Win List, most notably with fellow Indiana native Tony Stewart, who he grew up watching race NASCAR at Bristol Motor Speedway. Bayston is the 11th different winner through the Series’ first 17 races in 2022.

One night after making his 700th World of Outlaws Feature start, David Gravel of Watertown, CT earned his 500th top-10 finish with the Series.

Rico Abreu of St. Helena, CA claimed his 13th career Slick Woody’s QuickTime Award and second of the season on Saturday. He topped My Place Hotels Qualifying with a lap of 13.517 seconds, averaging a speed of 140.090 MPH at the 0.533-mile oval.

Championship leader Brad Sweet (13th) finished outside the top-10 for the first time since the season-opener at Volusia (FL) on February 10. His points lead dwindled as Carson Macedo (-20 PTS) and David Gravel (-30 PTS) closed the gap.

UP NEXT (Fri-Sat) – The World of Outlaws NOS Energy Drink Sprint Car Series will transition from one iconic 1/2-mile this week to another iconic 1/2-mile next week. Let’s Race Two will lead The Greatest Show on Dirt to Rossburg, OH’s Eldora Speedway on Friday & Saturday, May 6-7 for the first of seven shows at The Big E. Fans can BUY TICKETS HERE, or watch every lap LIVE on DIRTVision.