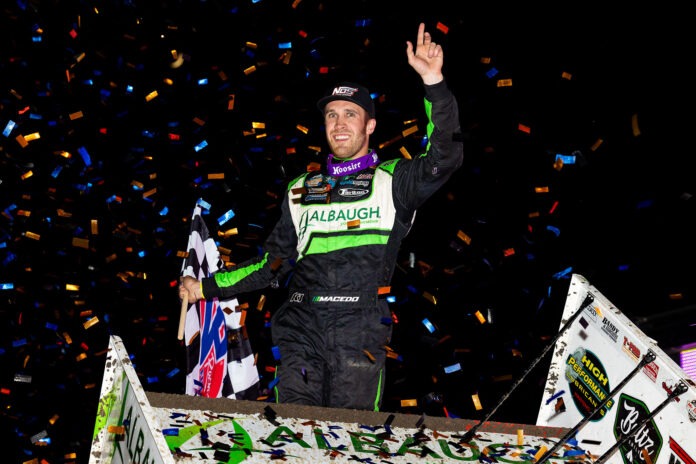 GRAND FORKS, ND – On Monday, Sheldon Haudenschild & Stenhouse Jr. / Marshall Racing made their mark as the first five-time winner in 2022 with the World of Outlaws NOS Energy Drink Sprint Car Series. On Friday night, Carson Macedo and Jason Johnson Racing quickly backed them up and followed suit with a fifth win to match.

Capitalizing amid heavy lap traffic on an even heavier race track, Macedo snookered Logan Schuchart on Lap 11 at River Cities Speedway and never looked back. The Lemoore, CA native set a torrid pace at the Grand Forks, ND bullring, lapping up to ninth-place within five minutes and 17 laps, and going unchallenged over the final three restarts with Schuchart, Donny Schatz, and Brad Sweet lining up behind him.

It was a much-needed confidence boost for a team that was still reeling from a stunning disqualification (weight requirement) at Williams Grove three weeks ago. They should’ve left Mechanicsburg with the championship lead, but instead began down a rough five-race stretch with an 13.2 average finish and fell to fourth in the standings.

By Friday, all that was in the rear view mirror and out of focus for the Rocky Mount, MO-based team. The Albaugh #41 was stout all night long at the North Dakota 1/4-mile, winning his NOS Energy Drink Heat Race, the DIRTVision Fast Pass Dash, and then the 35-lap Feature for his first triumph at River Cities.

“I think we’ve just had a bit of bad luck on top of being a little bit off lately,” Macedo said on their struggles lately. “I’m just happy to put these guys back in victory lane and pick up everyone’s confidence. We can go to Huset’s with our heads held high and hopefully contend for another win.

Phil [Dietz], Clyde [Knipp], and Nate [Repetz] have been working so hard. The character in the track really made it interesting tonight. It honestly felt like the more the race went on, the worse I got. My car just got heavier and tighter as the track was chunking out, and that was all while dealing with lap traffic. Luckily, I chose that right lane and snuck by Logan, that was a big move.”

That move around Schuchart on Lap 11 is what ultimately won Macedo his 22nd career World of Outlaws win. The first 22 laps of the race ran caution-free before the first restart allowed the Shark Racing, DuraMAX Oil, Drydene Performance Products #1S to line up alongside Macedo’s #41.

Knowing this was arguably his best shot yet with a double-file restart, Schuchart went full send into turn one with hopes of whipping around Macedo to re-claim the lead after pacing the first 10 laps. However, the track had different plans, reaching out and grabbing Schuchart as he started to hop, skip, and jump before flipping it over and landing upside down in turn two. Luckily, in a move that could pay dividends in the championship battle, the Shark crew made repairs in the work area and sent Schuchart back out to finish sixth.

Prepared for surfaces of all kinds, Macedo credited his training as an essential tool in claiming Friday’s win on a rough and tough race track.

“I spend as many days in the gym as I can to be ready for situations like tonight,” Macedo said on the surface. “We see everything with the World of Outlaws and sometimes you’re gonna get a cowboy up track for 35 laps. I was a bit fatigued by the end, so it’s all about having enough muscle left in you when you most need it.”

Ending an eight-race absence from the podium, championship leader Brad Sweet finally returned to the top-three for the first time since Tai-State (IN) in late April. A runner-up result for the Kasey Kahne Racing #49 extended The Big Cat’s points advantage as we approach the 25% mark of the 2022 season.

“It’s always nice to be on the front stretch,” a relieved Sweet said. “That was tricky, though. There was so much going on with the rappers, plus it felt like the track was only gaining grip as we went on. It was honestly pretty fun in lap traffic, though. I’ll take a second after this recent stretch we’ve been on. The results haven’t showed how hard these NAPA Auto Parts guys are working.”

Donny Schatz of Fargo, ND made the hour-long drive north to Grand Forks and continued his remarkable run of success at the track with a third-place effort. The 10-time World of Outlaws champion earned his fifth podium of the year, extending his record to 26 top-five finishes in 28 Series starts at River Cities Speedway. It was another solid effort with car owner Tony Stewart in attendance ahead of his induction into the National Sprint Car Hall of Fame tomorrow in Knoxville.

“I don’t know if I’ve ever been on two wheels that many times in my life,” Schatz joked on the unique characteristics of the track. “There’s no denying this place had a lot of character tonight, I think Larry [Hillerud] would’ve been smiling down on that one. That’s the nature of the beast, though, not much surprises me on the road anymore. This team keeps digging and we keep putting the results together. The more we show up on this podium, we’ll eventually get back into victory lane.”

Closing out the top-five on Friday night was James McFadden in fourth-place aboard the Roth Motorsports #83, and David Gravel in fifth-place in the Big Game Motorsports #2.

Rounding out the top-10 at River Cities was the #1S of Logan Schuchart in sixth, the #3Z of Brock Zearfoss in seventh, the #9 of Kasey Kahne in eighth, the #13 of Mark Dobmeier in ninth, and the #20G of Noah Gass in tenth.

Carson Macedo’s fifth win of the season brings him and the Jason Johnson Racing #41 into a tie with Sheldon Haudenschild and the Stenhouse Jr. / Marshall Racing #17 for most wins with the Series in 2022. By pacing 25 laps on Friday, Macedo also becomes the first driver through 24 races to lead 100+ laps this season.

Macedo’s 22nd career World of Outlaws NOS Energy Drink Sprint Car Series victory moves him beyond Rick Ferkel and Tim Kaeding into sole possession of 28th on the All-Time Win List. Next up is Ron Shuman of Tempe, AZ at 24 career wins.

Of the 11 drivers to break into the nine-second bracket during My Place Hotels Qualifying, Sheldon Haudenschild led them all with a lap of 9.693 seconds around River Cities Speedway. He’s the sixth driver to earn multiple Slick Woody’s Cornhole Company QuickTime Awards this season.

A trio of NOS Energy Drink Heat Race wins went to Carson Macedo (67th career), Kasey Kahne (15th career), and Kraig Kinser (123rd career). Macedo followed that with his second DIRTVision Fast Pass Dash win of the season to earn the pole position. Austin Pierce of Grand Forks, ND topped the MicroLite Last Chance Showdown. He was one of 11 local drivers to qualify for their first NOS Energy Drink Feature of the 2022 season.

UP NEXT (Sun) – The World of Outlaws NOS Energy Drink Sprint Car Series will be off tomorrow night, but the racing resumes on Sunday, June 5 with the first of four stops at Huset’s Speedway in Brandon, SD. The Sunday night showdown is a precursor for the upcoming $100,000-to-win High Bank Nationals at the track on June 23-25. Fans can BUY TICKETS HERE, or watch every lap LIVE on DIRTVision.