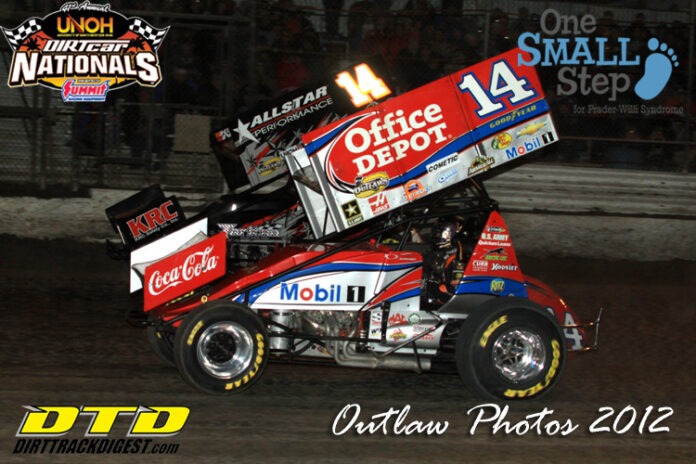 KNOXVILLE, IA  – In the world of Sprint Car racing, there is no greater achievement when honoring the life work of an individual than to be inducted into the National Sprint Car Hall of Fame. Today, the next 12 men in line receive that ultimate honor of forever being enshrined as an impactful member of the sport.

Founded in 1986 and spearheaded by visionaries Ralph Capitani, Don Lamberti & C.K. Spurlock, the Hall of Fame has been recognizing the dedication and passion of drivers, owners, manufacturers, promoters, and more for 35+ years. The museum, an iconic fixture outside of turn two at Knoxville Raceway, has been educating fans and honoring legends since it broke ground in 1991.

As the class of 2022 heads to the hall today at The Sprint Car Capital of the World, many inductees make their way into the history books with a significant impact on the World of Outlaws NOS Energy Drink Sprint Car Series.

John Gibson has dedicated his life to the World of Outlaws, that’s no exaggeration. The Pennsylvania native parlayed a program-selling business and a chance opportunity to take the mic with Bobby Gerould into a career as what he calls “the luckiest race fan in the world” back in 1995. Proof of his passion for the sport is the fact that Gibson has called more than 2,000+ consecutive World of Outlaws races since he made his first call 27 years ago. From his iconic Often Imitated, Never Duplicated four-abreast tagline to his signature shouting of QuickTiiimeee, “Gibby” has created a niche of loyal fans with his knack for painting a picture with words and his otherworldly knowledge of the sport. His induction wasn’t a matter of if, but when, and that time finally comes today for a well-deserved man.

Tony Stewart has earned his induction into the Hall of Fame in every category imaginable – driver, owner, promoter, you name it. The driving portion of his career is covered by a historic USAC Triple Crown in 1995 and three World of Outlaws wins on a part-time basis. As a car owner, he’s one of the greatest in World of Outlaws history with 300+ victories and nine championships provided by the likes of Donny Schatz, Danny Lasoski, Steve Kinser, and more in 20 years of operation. As a promoter, he’s kept the legacy of Eldora Speedway alive and well in the post-Earl Baltes era and he’s resurrected the All Star Circuit of Champions into the best shape in Series history. Everything “Smoke” has touched, he’s done with 100% passion in hopes of elevating the sport to the next level. On his induction into the Sprint Car Hall of Fame, he said “it means more than all of the other ones, because I’ve poured my heart and soul into this sport for the last 20-30 years.”

Dennis Roth is one of the longest tenured car owners in World of Outlaws history, and he’s got the credentials to go along with it. The man behind the Beef Packers mobile has seen his #83 entry reach victory lane with The Greatest Show on Dirt on 98 occasions, two shy of becoming only the sixth man in 45 years to send his car on 100 winning ways. He’s offered his seat to countless men over the years, owning the record for most World of Outlaws wins with different drivers (15). The California businessman now supplies the ride for James McFadden and continues to be one of Sprint Car Racing’s biggest supporters. He’s enjoyed glory at Knoxville before with multiple Nationals titles, but this induction to the Hall of Fame may be his sweetest triumph in Iowa as we acknowledge his contributions as world-class car owner.

Tim Green of San Jose, CA is a 12-time World of Outlaws winner, still ranking 39th on the All-Time Win List. In less than 20 full seasons behind the wheel, Green left a lasting mark as one of the most impressive stars to come from California’s west coast throughout the 1970’s and 80’s. He was a multi-time champion with NARC 410, topped specials at Manzanita’s Western World, Skagit’s Dirt Cup, and twice sat on the pole of the Knoxville Nationals before finishing fourth.

Terry Gray of Bartlett, TN claimed his lone World of Outlaws win at the young age of 22 years old at one of his home tracks, Riverside (AR), in 1980. It would be his only win with the Series in 200+ starts, but that was only the beginning of his Hall of Fame career. The Tennessee native went on to become a legend in the ASCS and USCS ranks, winning championship after championship, and becoming an acclaimed mentor for the next generation.

Jack Kromer also heads for the Hall of Fame this year, a distinguished dirt track photographer, who has been crafting imagery longer than the World of Outlaws have been around. He’s joined in the media category with Gibson and the late, great Robin Miller, who’s passion for dirt track racing never wavered amid his transition to cover the world of IndyCar racing.