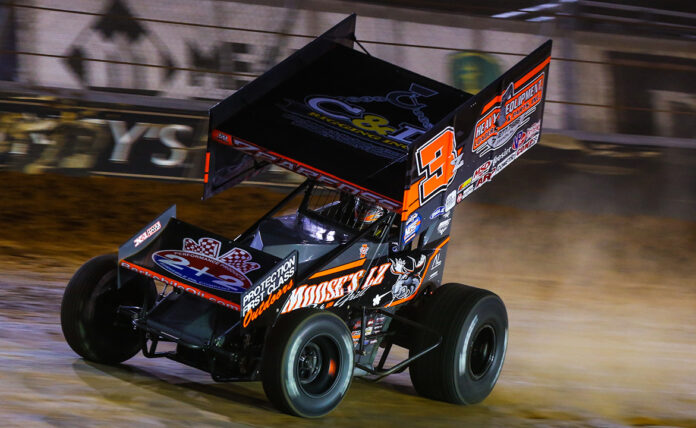 WEST BURLINGTON, IA  – In times of doubt, Brock Zearfoss told himself he needed to pull off the World of Outlaws NOS Energy Drink Sprint Car Series tour. The hardships of failure along the 80-plus race tour across the country were taking a toll. But when he laid down at night and his mind eased, his heart then did the talking and convinced him he was where he wanted to be.

So, every day, he woke up and worked harder than the last. And on July 2 at Cedar Lake Speedway his commitment finally paid off.

Fighting to hold in emotions melting his doubts into joyful tears, Zearfoss stood in Victory Lane for the first time as a full-time World of Outlaws driver – his second Series win overall and first in five years.

“Five years is a long time,” said Zearfoss, of Jonestown, PA. “The first one was special just because it was our first win but this one is special too. Just a little different feeling, being a full-time Series competitor instead of racing at your home track and beating them. It’s a little different. Both are very special.”

His first Series victory came at Williams Grove Speedway, in 2017, when he was still a PA Posse member, running weekly at tracks in Pennsylvania. After years of success in his home state, including a track championship at Port Royal Speedway, Zearfoss went full-time with the World of Outlaws in 2021.

The move came with its challenges, not earning a top-five finish until the final race in 2021 and missing races due to a concussion. His struggle to find consistency continued into this season but no matter how steep the frustrations built up, he took them each in stride and used them as a learning experience for the next race, slowly building momentum.

“Obviously, when you drive up and down the road and get your ass kicked every night, you know, it just really beats you up,” Zearfoss said. “We had success at home and then we left to go on the road and then start getting our butts kicked. It’s definitely an eye opener. Just have to be humble about everything. Take the licks on the chin and understand that it doesn’t happen overnight when you’re on the tour.

“You have to put your time in and pay your dues on the road. It’s so cutthroat and everybody is so equal that just that little bit of extra experience carries them farther than you would. You just take every night as a lesson and keep it in the bank for the next time you go up there.”

While there are drivers on the tour he can lean on for questions about life as a full-time Outlaw, Zearfoss knows he may not always get the full answer. They’re all trying to make a living being full-time race car drivers and in the end it all comes down to winning.

“If you win, it all becomes easier,” Zearfoss said. “Finding how to do that, you have to find out on your own really. It’s not easy. But, racing with the best drivers in the world in Sprint Cars is going to make you a better driver overall. If you want to be the best, you have to go up against the best.

“You might be able to win some races at home at the local level, but it is not anything like racing with the World of Outlaws. The tempo and pace are so much more than it would be on the local level. Just how everybody races. You become such a smarter driver racing with the World of Outlaws. That’s what makes them so good. They’re so smart with making decisions. They’re good at keeping pace up with their cars even when they shouldn’t be. So, it just teaches you how to do that and makes you better in the long run.”

That experience and his no-quit attitude led to Zearfoss besting three-time and defending World of Outlaws champion Brad Sweet on a restart at Cedar Lake – a track Sweet won five of the last six races at – and then holding off he and David Gravel for the Independence Day Spectacular win in his family-owned Moose’s LZ Bar & Grill #3Z car.

“I knew if I could stay on the bottom on that restart I would have a chance to beat him to the corner and we did,” Zearfoss said. “It wasn’t easy. It wasn’t a ‘gimme’ there by any means. We still had to stay in front of everybody. I wasn’t sure what to expect on the restart, but I knew if I could nail it that we would definitely have a chance.”

Zearfoss and his team, consisting of Shane Bowers (crew chief), Matt Frisbie (car chief) and Mike Danner (tire specialist), have fought week-in and week-out to keep their morale up every race. This week, it’ll be a little easier for the next stops at 34 Raceway (Friday, July 8) and Wilmot Raceway (Saturday, July 9).

“We’re heading on the right path, the right direction,” Zearfoss said. “If we continue with what we’re doing, with getting the win, it’s a huge morale booster for everybody. Everyone is more confident in each other. It’s just going to help everything and mesh together more than what it’s been doing now. Kind of keep the flow going with how we’ve been and hopefully continue the success.”

If you can’t make it to the track this week, you can watch all the action live on DIRTVision – either online or by downloading the DIRTVision App.