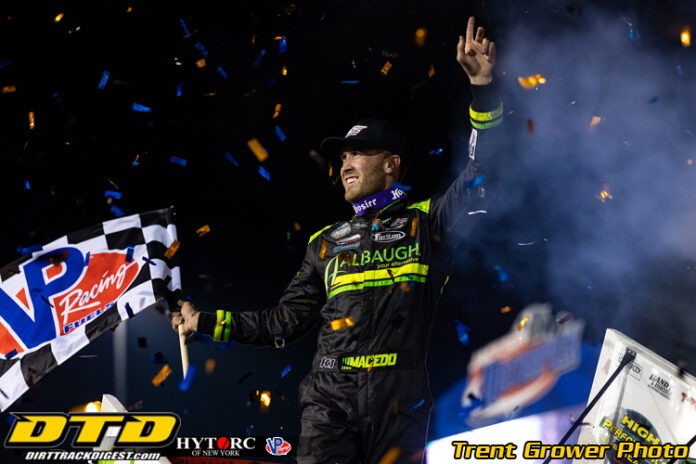 JACKSON, MN – The 44th annual AGCO Jackson Nationals offered the lowest of lows to highest of highs for one team within a span of seven hours.

Carson Macedo and Jason Johnson Racing lost the Saturday afternoon show in heartbreaking fashion with a last-lap pass from Logan Schuchart. They returned to the pit area down and dejected, but still determined with more racing ahead in Saturday’s $25,000-to-win nightcap.

As day turned to night, Macedo turned from zero to hero as he went from the worst King of the Hill time to easily the best Feature car. The Lemoore, CA 25-year-old wheeled the Albaugh #41 from eighth to first in the 35-lapper and outlasted a different Shark Racing teammate, Jacob Allen, to score a redemption-filled ninth World of Outlaws NOS Energy Drink Sprint Car Series win.

The win not only puts him back atop the pedestal as the winningest driver on tour in 2022, but it also makes Macedo the winningest driver (20 wins) in JJR’s short, but storied history with The Greatest Show on Dirt. It was a fitting moment as the team earned their 50th World of Outlaws win at Minnesota’s Jackson Motorplex, the site of Jason Johnson’s final victory on June 9, 2018.

“Losing that one earlier stung a lot, so it feels extra good to find some redemption in the one that counts,” Macedo said in Victory Lane. “It’s incredible to stand up here with nine wins this season. I hadn’t won even five races prior to joining JJR, and now we’re able to click off wins and execute as a team when it matters most. When I was a little kid I thought the World of Outlaws was the most amazing thing in the world, so this is all still a dream come true for me.”

Macedo’s latest breakthrough, which returns the claim of the winningest team on tour to JJR, was mainly accredited to revered crew chief, Phil Dietz. The #41 timed in dead last during the King of the Hill and things looked bleak ahead of the big dance, but then the wrench came out and Dietz turned his magic up.

“I can’t brag enough on Philip,” Macedo spoke on his crew chief. “We were horrible in that King of the Hill and I came in complaining, and he just went right to work. He did what he does best and put an incredible setup on this deal. I could go anywhere I wanted in that race. One thing we’ve learned more than anything this year is that it truly does take a team. Every piece of the puzzle matters here, especially my guys Clyde Knipp and Nate Repetz.”

Once officially in the lead on Lap 17, Macedo never looked back and cruised to a 2.757-second margin of victory at the checkered flag. However, his path to the top spot, included a dogfight with Allen’s #1A as the young duo swapped command on multiple occasions before Macedo’s high-side momentum ultimately paid off.

In pursuit of a third consecutive Jackson Nationals title for Shark Racing, Jacob Allen paced the opening 16 circuits before Macedo seized control. The Hanover, PA native was chasing the richest win of his career at $25,000 but instead settled for another impressive runner-up result as he continues to shine aboard the Pells Tire Service, Low-E Insulation entry.

“I’m thrilled with our performance today,” Allens said after another podium effort. “A third and second is nothing to hang your head about against these guys. It feels awesome to contend for these wins. I felt like my pace was good on the bottom, but I just flat-out lost that race to Carson on the top. He’s a fantastic driver and that entire JJR team is top-notch, so I know I didn’t lose to a slouch by any means. It’s a lot of fun working with my crew during stretches like this.”

David Gravel closed out the podium in third place aboard his Big Game Motorsports, Billion Automotive #2. The Watertown, CT native started from the outside pole in the 35-lapper but faded back to fifth early on before rallying and returning to a podium spot at his car owner’s home track.

“I felt like we had a good car, but we just came around too late to make anything happen,” Gravel said following his 14th podium of the season. “I really want to get this Billion Automotive car into Victory Lane. We deserved one at Huset’s and I think we were close tonight.”

After challenging for the top spot early on, James McFadden slipped back to finish fourth aboard the Roth Motorsports #83. The Australian was joined in the top five by leading rookie contender, Spencer Bayston, who recovered from a rough afternoon program by driving to fifth in the CJB Motorsports, TrueTimber #5.

UP NEXT (Fri-Sat) – The Second Leg of the Northern Tour takes The Greatest Show on Dirt back to North Dakota next weekend. The World of Outlaws NOS Energy Drink Sprint Car Series will stop at River Cities Speedway in Grand Forks, ND on Friday, August 26, and then at Red River Valley Speedway in West Fargo, ND on Saturday, August 27. Fans can BUY TICKETS HERE, or watch every lap LIVE on DIRTVision.