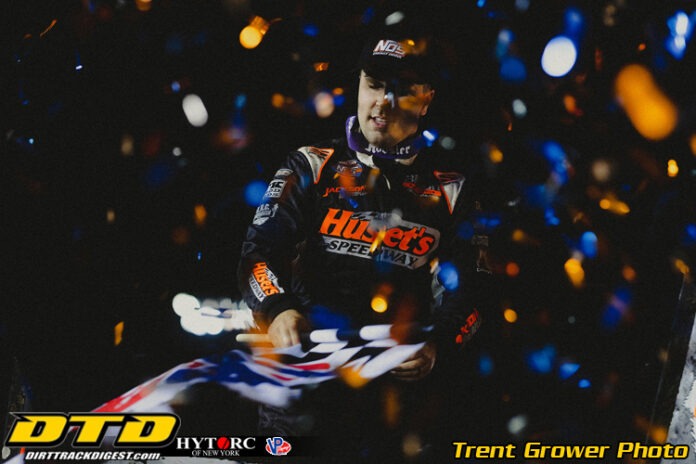 GREENWOOD, NE – While I-80 Speedway ends an era this week as the track closes, David Gravel begins a new one as a father.

On Friday night, the two coincided as Levi’s dad, a championship hopeful, dominated all 30 laps of the final World of Outlaws NOS Energy Drink Sprint Car Series event at the Greenwood, NE 4/10-mile.

The 30-year-old Watertown, CT native continued his life-changing week – after welcoming his first son with wife Jillian on Monday – by increasing his title odds as he now only sits 56-points behind Brad Sweet with five races remaining.

It’s a bittersweet win for the Big Game Motorsports #2 team, as the sport also says goodbye to a beloved track with I-80 Speedway selling and shutting down after this weekend.

“Man, I’m so sad to see this place go,” Gravel told a sold-out crowd that attended the 34th and final World of Outlaws race. “It’s so unique. We don’t get to race tracks this wide typically. We’re losing a couple of race tracks this year and that’s not what we need. It’s pretty cool to say I won the final race here, but that’s not really a good thing. Hopefully, we can do it again tomorrow and I can get back to celebrate with my new family.”

Leading all 30 laps of the contest from the outside pole, Gravel’s game plan didn’t exactly come to fruition as trouble on the opening lap took pole sitter Giovanni Scelzi out of the mix.

“I thought we were good every time we hit the track, but I was a little nervous at the start of the Feature,” Gravel noted. “I wanted Gio to lead at the beginning to try and pace off him, but obviously that didn’t happen. It feels like you’re flying around the top here so I struggle to judge my pace leading by myself.”

A handful of restarts and an #Open Red – handled by crew members Cody Jacobs, Trey Bowman, and Zach Patterson – could do nothing in deterring Gravel’s path to victory lane. While he celebrated a seventh win of the season and 76th of his career, all eyes remain locked on an increasingly intriguing battle for the $200,000 World of Outlaws championship.

“I just plan on beating him every night and wherever we end, that’s where we end up,” Gravel said as he trails Sweet by 56-points with fives races left. “We’re just going to keep racing hard and putting the pressure on them. I know that we probably need a really bad night for him to make it happen, so I’m just minding my own business. I’d love to get to 10 wins this year, that’s what is first on our mind right now.”

Storming from ninth-to-second, Sheldon Haudenschild ends his I-80 Speedway career with three top-fives in three World of Outlaws starts at the track. The Stenhouse Jr. / Marshall Racing, NOS Energy Drink #17 came on late in the running and cut into Gravel’s lead, but simply ran out of time.

“I love this place,” Haudenschild told an energetic crowd. “I wish we could keep it going and come back here every single year. Overall, a good night for us. We rallied pretty well from Qualifying to Feature and had a great car by the end. We’ve been trying some stuff as the season winds down to find what we like best.”

After battling for the lead early on, Carson Macedo slipped back to finish third and claim his Series-leading 25th podium in the Jason Johnson Racing #41. The Lemoore, CA native never finished off the podium in three trips to I-80, finishing second, third, and third at the track.

“There was a certain point where I thought I could win this deal tonight and then the very next moment, I knew I was struggling,” Macedo said on his whirlwind 30-lapper. “I thought when I got to traffic that I would be able to do something with David, but it only got tougher from there and Sheldon got me then. All in all, a good run for us to get back on the podium tonight.”

Closing out the top-five at I-80 was James McFadden in the Roth Motorsports #83 and Brad Sweet in the Kasey Kahne Racing #49, who now leads the championship by 56 markers after losing 38-points over the last three races to Gravel.

Rounding out the top-10 on Friday was Brock Zearfoss in sixth, Logan Schuchart in seventh, Brian Brown in eighth, Donny Schatz in ninth, and Giovanni Scelzi in 10th.

David Gravel’s 76th career World of Outlaws NOS Energy Drink Sprint Car Series win brings him within three more from tying Brad Sweet (79) for 11th on the All-Time Win List. He added I-80 Speedway as the 41st track he’s won at and Nebraska as the 23rd state he’s won in.

Gravel opened the night with his 97th QuickTime Award, topping the final My Place Hotels Qualifying session at I-80 Speedway with a run of 13.674 seconds. He’s on the verge of joining Joey Saldana (157) and Donny Schatz (106) as the only drivers to hit triple-digits in World of Outlaws QuickTimes this century.

UP NEXT (Sat) – The World of Outlaws NOS Energy Drink Sprint Car Series is heading three hours south tonight in anticipation of Saturday’s showdown at Lakeside Speedway in Kansas City, KS. Fans can BUY TICKETS HERE, or watch every lap LIVE on DIRTVision.