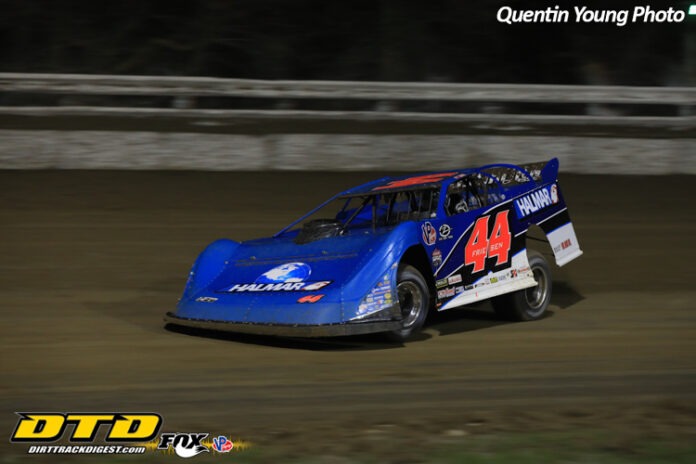 NICHOLS, SC – He’s a Big-Block Modified star with the Super DIRTcar Series, a Truck Series regular in NASCAR, and now, a Late Model pilot with the Drydene Xtreme DIRTcar Series.

Stewart Friesen, of Niagara-on-the-Lake, ON, is set to make his Series debut in this weekend’s South Carolina doubleheader on Saturday, Feb. 20, at Lake View Motor Speedway and Sunday, Feb. 21, at Cherokee Speedway for the Frostbite 40.

He’s had a packed schedule over the past month – Big-Block racing in the 50th DIRTcar Nationals at Volusia Speedway Park and his NASCAR commitments at Daytona International Speedway – but he’s motivated to better himself in Halmar Friesen Racing’s newest motorsports venture, the Dirt Late Model.

“The Xtreme [DIRTcar] Series is something I was watching,” Friesen said. “It’s after the Big-Block and Truck stuff is done for the year. We watched [Brandon] Overton win at Cherokee and then [Chris] Madden win [at Volunteer].

“It’s unique. It’s like, we could almost race every weekend, 12 months out of the year with the Late Model.”

Like the Canadian, several of the drivers competing this weekend have yet to make a lap around Lake View Motor Speedway. However, the majority of them are familiar with the 3/8-mile Cherokee Speedway. Even Friesen.

He and his new Cornett-powered Halmar International Longhorn Chassis first got to know each other in their initial testing session at Cherokee last month. He then made the trip further south to race at All-Tech Raceway and in East Bay Raceway Park’s Winternationals, marking his first competitive nights in the car.

While he was unable to qualify for a Feature in those events, he broke through with a second-fast Qualifying effort in his group, a Heat Race win and a seventh-place finish in the second night of competition at Bubba Raceway Park on Feb. 2.

He’s won numerous races with the Super DIRTcar Series, took a checkered flag with the World of Outlaws NOS Energy Drink Sprint Car Series in 2015 and even has two NASCAR victories in his Truck. He’s mastered his skills in all three disciplines and is ready to take on the new challenge of a Dirt Late Model.

“It’s cool. It’s definitely unique,” Friesen said. “It’s a different experience from the Truck, the [Big-Block] Modified or even the Sprint Car racing I did some years ago. Definitely something I’ve always wanted to do, being a fan of that discipline of racing.”

He’s said before that there are “zero moral victories,” even when it comes to something as new and challenging as the Late Model is to him. When he missed the final transfer spot by one position to get in the Feature of his only East Bay appearance last month, a strong feeling of frustration set in. But while that relentless desire to improve and compete against the best drivers fuels him, he knows it’s going to take some time for he and the car to fully mesh.

“We’re realistic about our goals with the Late Model,” Friesen said. “Especially in Florida during the Speedweeks chase when there was 60s, high-50s car-count; East Bay had like 76 the night we ran there. So, our first goal was just to qualify for a Feature.”

With three new tracks now under his belt in a Late Model, all of different sizes and surface types, Friesen’s ready to apply all he’s learned in the past month and tackle a fourth new venue this weekend at Lake View.

“I probably learned more about racing and that style in those couple of weeks than I have in the last 10 years between the Modified and Truck races,” Friesen said. “It’s a whole different discipline, but it’s been really exciting and a lot of fun to learn that.”