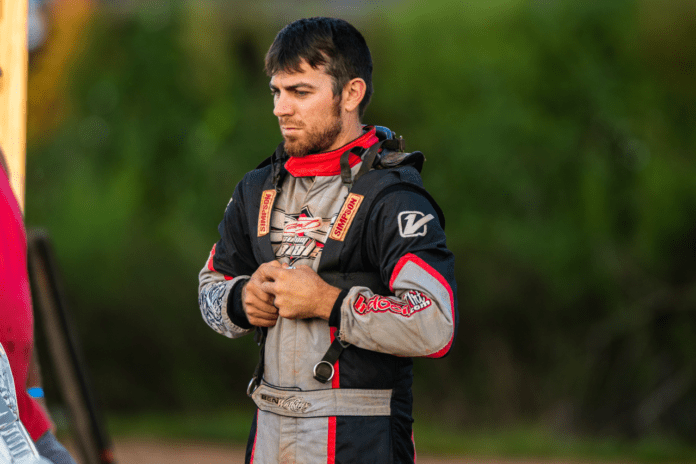 NICHOLS, SC – When he set out on the Drydene Xtreme DIRTcar Series trail in November, Ben Watkins’ goal of championship glory was merely a distant vision.

Now with only three races remaining on the schedule, that vision is getting closer to reality as he takes a 16-point lead into the final weekend of the season.

“It would definitely mean a lot,” Watkins said, reflecting on his drive to win the Series crown. “I feel like the Drydene Xtreme DIRTcar Series is a reputable name out there, so to put my name on the list with the other guys that have already been on top would be awesome.”

He’ll have to defend the points lead from a hungry Super Late Model rookie in Carson Ferguson and a driver who knows Cherokee like few others – Ross Bailes. Being in contention for a Late Model championship with drivers of this caliber was only something he dreamt of doing from humble beginnings of his career, but is now a very realistic achievement with the work he and his team have put in over the winter.

“Starting back at the beginning, my goals weren’t very high,” Watkins said. “Just to get into Super Late Model racing was a goal. I feel like everything else beyond that has been a great accomplishment.

“But don’t get me wrong – this would rank up there with my top accomplishments if we can secure the championship.”

Through five races, Watkins is the single most consistent driver with four top-fives, no finishes outside of the top-10 and is in contention to win his first regional Super Late Model championship since 2015. In the midst of one of the most successful stretches of his career, Watkins attributes much of his success to the link between he and car co-owner/crew chief, Wesley Page.

“We’ve really hit on some stuff that I’ve been comfortable with,” Watkins said. “Around this time last year, we got together for the first time. So, I think us just meshing together as a team and finding common ground we both like on the racecar – that’s been the recipe for success.”

Watkins and Page were several months into their partnership when they struck gold in September of last year, beating the World of Outlaws stars in the Charlie Mize Memorial at Lavonia Speedway. It was Watkins’ first career victory against a field of national-touring drivers – one that set him up for a fruitful return to Lavonia with the Xtreme Series three weeks ago, where two podium finishes in two days won him the points lead.

Next weekend, he’ll need to be strong when he and the Outlaws cross paths again in the two-day Rock Gault Memorial at Cherokee to close-out the Xtreme Series tour and crown a champion. Though he said Cherokee’s been up-and-down for him in the past, Watkins has been riding a big wave of momentum lately and feels better each time he visits the big, 3/8-mile oval.

“As a team, each time we leave the shop, I feel like we’ve got a chance to win races and compete well,” Watkins said. “I do feel like if we can make all the right moves and I, as a driver, do my job the best that I can do, we’ve definitely got a shot.

“With it being co-sanctioned, it will make for an interesting race inside-of-a-race, which should be entertaining for everybody.”